You may have noticed that we spend a lot of time talking about the Pyrenees. That’s because the Pyrenees are right in our backyard, literally. That doesn’t mean we don’t love climbing other mountains. France has hundreds of amazing climbs and many of the most well-known are in the Alps. We love cycling there too and have recently added a Raid Alps trip to the calendar.  The Alpine cols long been a part of cycling culture and many legendary stages of the Tour de France have played out on the slopes and summits of these giant mountains. Snow-capped peaks fill the sky. Authentic chalets dot the meadows, along with brown-eyed cows wearing melodic bells and the smell of wildflowers fill the air. Traditional restaurants serve hearty dishes like raclette and fondue, perfect to help you recover from a hard day of climbing. But the beauty of the Alps is how much they change from North to South, as you pedal towards the sea.

In Haute Savoie: which borders Switzerland and Italy, Mont Blanc dominates the skyline. It will provide some spectacular views during your ascent of the equally mighty Col de la Colombière. This is a real Alpine climb and is often featured in the Tour de France. If you’re lucky, you’ll glimpse the rare ibex that calls this mountain home. Just to the south is the Savoie, probably best known for the famous cheeses made there: Beaufort, Tomme, Reblochon and Raclette. The landscape is breathtaking, deep in the heart of fairytale mountains. During a Raid Alps tour, you’ll circle the stunning Lake de Roselend, a high-altitude lake shimmering in the sunshine. 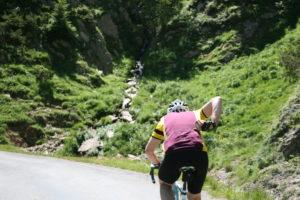 The Isère: Further along the Raid Alps route there is this region, which holds the crown jewels of cols. Here you’ll climb the legends of the Tour de France and they’ll be an epic test of your legs. Start the day with the massive but beautiful Col de la Madeleine, then the mythical Col du Glandon before finishing with the iconic 21 bends of Alpe d’Huez. There’s no rest for weary legs as you cycle south to the Hautes-Alpes  where the dramatic Col d’Izoard waits with towering bare stone. The road will begin to pitch and roll as you head away from the alpine zone and towards the sea. Some steep sections will remain to cap off a challenging day in the saddle.

On the second to last day of the Raid Alps tour, you’ll notice the mountains take on a more Mediterranean feel, though they’re just as high and steep as their northern brothers. The Col d’Allos is one of France’s highest passes and was first used in the 1911 Tour de France. Today, it is still popular with cyclists and to encourage cyclo-tourism, is closed to cars every Friday morning in July and August.   Finally, signs of the south appear in the region of the Alpes-Maritimes  and you can begin to pedal a bit easier as the hard work is almost done. Welcome to the French Riviera and as you cycle towards Nice, enjoy wide open views of the ocean. You’ll hardly notice the climbs now because of the distracting views of the Côte d’Azur.

Already taken our Basque Country or Raid Pyrenees tour ? Looking for another epic cycling adventure with Bike Basque? Why not consider a trip to another of France’s most iconic mountain ranges, the incredible, awe-inspiring Alps!