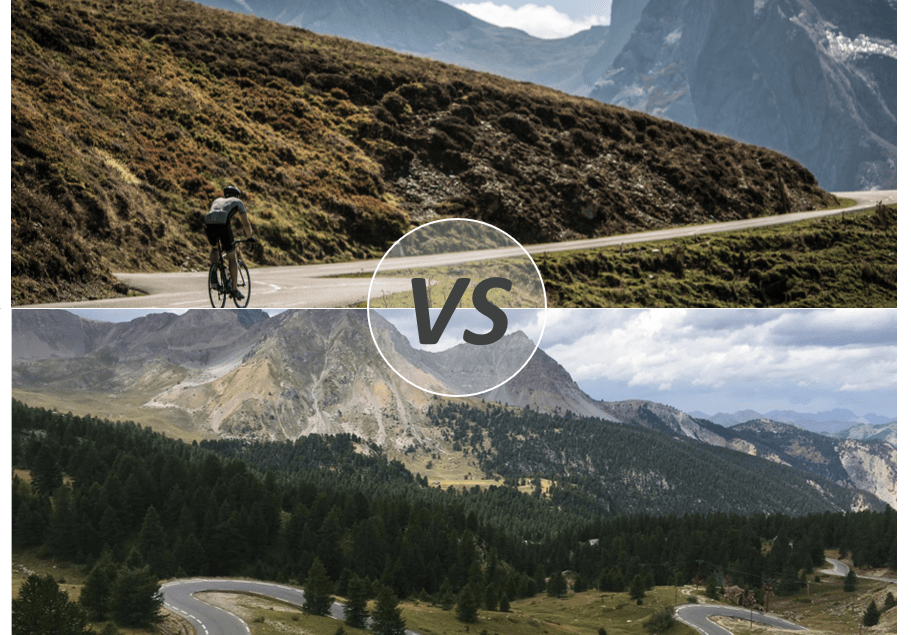 In the next three blogs, we’re going to compare the two main road-cycling adventures in France – the Raid Pyrenees from the Atlantic to the Med and the Raid Alps starting up north and moving through the mountainous pass to the Cotes d’Azur.

Starting from the magnificent city of Biarritz, this ride takes you 15 kilometres into the Spanish countryside, passing a number of traditional Basque towns (the only part of the Raid Pyrenees out of France). Even if at first glance the 3 climbs (Otxondo, Ispeguy & Osquich) don’t look so intimidating, the total length of the day, numerous false flats and deceptively testing hills will tire you enough so that you properly enjoy your hotel and dinner.

You’ll begin in Thonon-les-Bains – a spa town that overlooks the shimmering Leman lake and faces Switzerland. From there, you will tackle 3 climbs – firstly, the Col de la Jambaz which is something of a long false flat, with only the last 6 kilometres averaging 4-5% incline. Then you’ll tackle the Col de la Colombiere, which at 14km at 7% incline is the first ‘real’ climb. Finally, you’ll move to the finish through the Col des Aravis, which is not too steep and is only 7 kilometres in distance. From there, the hotel…

This is a case where the numbers do not tell the whole story. Whilst the Raid Alps clocks in at  a higher elevation than the Raid Pyrenees (2,600m vs 2,300m), as well as more distance of climbs (41km vs 21km), it is actually the Raid Pyrenees that is the tougher ride on Day 1. This is due to its long and tiring sections in between the climbs that are never easy (but are always satisfying). The Raid Pyrenees also offers a number of stunning viewpoints that will take the rest of your breath away…

To shake off any soreness from the previous day, you’ll have a good hour and half to warm up on beautiful tiny routes before hitting the nasty Marie-Blanque. This is a short climb, but the last 5 kilometres are super steep (averaging 11% inclination) – the steepest you’ll find in the Raid Pyrenees tour. Then you’ll get to the superb Aubisque, the ‘Litor circus’ – crowed with horses and ‘Patou’ dogs. From there, it’s a quick climb up to the Soulor before going down to your hotel.

For your second day, you’ll quickly climb up the Saisies – a gentle climb (never exceeding 8% incline) with a beautiful view. From there it is a simple descent, during which you’ll take in the village of Beaufort (renowned for its cheese) before starting the climb of the ‘Cormet de Roselend’ (meaning ‘humid summit’ in the local dialect). The first part runs into the woods, but after 12 kilometres of climb you’ll overlook the Roselend Lake, an astonishing geographical feature which makes this perhaps the best climb of either Raid tour. The second part of the climb is very gentle, allowing you the time and focus to properly enjoy the spectacular views of the lake. Then it’s the long descent where Johann Bruyneel, the famous Belgian rider and sporting director for Lance Armstrong, crashed during the Tour de France 1996. After the descent, it’s a long and pleasant descent back down to your hotel.

In terms of difficulty the two days are equivalent – the total elevation of the Raid Alps is a bit higher as the climbs are longer. But, whilst longer they are not as steep, which makes a big difference (everybody will agree that it’s easier to climb 2km at 6% than 1km at 10%). Nevertheless, in the first case you’ll gain 120 meters of elevation while in the second case just 100 meters. Focusing on scenery – the Cormet de Roselend by itself makes all the difference – if you have to choose one climb to do in France, go for that one…