When most people talk about cycling in the Pyrenees, it is the central mountains they typically think of first. The heart of the Pyrenees is where many of the Tour de France giants live and where many legends of cycling have been born. The department is called Hautes-Pyrénées and is indeed the “high” country, where the tallest peaks can soar 2,000 meters and above. When cycling the RAID Pyrenees route from east to west or west to east, it is these central mountains that should provide the most challenging or at least the most popular climbs. 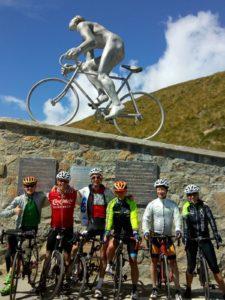 Perhaps the most famous of all is the mythical Col du Tourmalet. First appearing in the Tour de France in 1910, the climb was so difficult for racers of the era (the road was unpaved back then) that the second man to summit by bicycle, Octave Lapize, famously shouted at the race organizers “Vous êtes des assassins! Oui, des assassins” as he cycled past. The weather at the top of Tourmalet is notoriously temperamental, often covering the road and surrounding peaks in mist and showers. It is a lucky person who gets to summit in the bright sun and they are rewarded with some of the most picturesque views in the Pyrenees. Don’t worry, Bike Basque guests love this climb even in the rain! As the highest paved road in the Pyrenees, ascending to the top of Tourmalet from either direction gives any cyclist bragging rights.

Have more categorized climbs on your bucket list? Then you’ll be happy to know there are plenty of Tour de France cols in the Central Pyrenees to test your legs and make your cycling holiday dreams come true. How about conquering five in a row? The daunting combination of Col de Peyresourde, Col d’Aspin, Col du Tourmalet, Col du Soulor and Col d’Aubisque, known as the “Circle of Death” is an epic test of fitness and determination.  The Col d’Aubisque itself is famous for its giant bicycle sculptures, often photographed as a souvenir of the popular climb. The road between Soulor and Aubisque is called the Cirque du Litor and is often called the most beautiful stretch of road in the world. 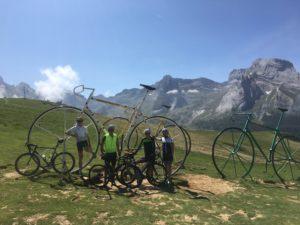 Looking for something a little less daunting? The HC category Superbagnères will challenge any level of climber but the stunning vistas from the summit might inspire you to linger a little longer at the top, perhaps even enjoy a coffee while you’re there. Right in the heart of the Pyrenees National Park, is the beautiful Hourquette d’Ancizan. Still a category 1, thanks to the gentle valleys surrounding the road, this climb might almost feel easy and is perfect for a slow pedal to take in the view of trickling streams and herds of wild horses in the meadow.

These climbs are only the beginning. This area holds countless other mountain treasures and the cycling adventures are endless. Filled with cozy summit cafés and comfortable hotels, the central Pyrenees offers an unforgettable experience for every level of cyclist. Whether you desire an intense few days in the mountains or a RAID Pyrenees tour from sea to sea, no French cycling vacation is complete without a visit to the heart of the high mountains.