The Western Pyrennees: Where the Raid Pyrenees Begins.

In the last post, we briefly introduced the Pyrenees. Since they are a vast and mysterious place, there’s hardly room in a single blog to describe the entire chain of mountains. In the next few editions, we’ll talk more about cycling the three main regions of the Pyrenees in France. Since Bike Basque’s home-base is in Biarritz, the western Pyrenees are a good place to begin.

The western or Atlantic Pyrenees begin with the rolling Basque mountains, continue through the dramatic Aspe Valley and end at the soaring Somport Pass. The continuous line of peaks to the east are located in the central Pyrenees, which we will discuss in the next post.

The western side of the range, lies within the departments of the Pyrénées-Atlantique and the Hautes-Pyrénées and is far more populated due to its proximity to the coast. Fortunately, major motorways stay well away from the mountains and the roads are relatively free from the crowded conditions found in other parts of the Pyrenees. Initially, the landscape is dominated by green fields of grazing sheep but the terrain becomes more rugged and dramatic as you pedal east. The famously unpredictable weather (even in summer) has one benefit: lush vegetation and wild rivers. Though not as high as the central mountains, the climbs here can be steep and plentiful. 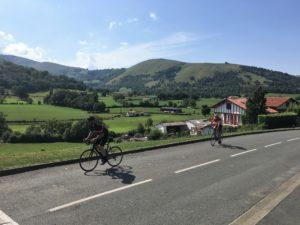 Some of the best-kept-secret climbs are located in the Western Pyrenees. Many, like the Col d’Osquich, are located in the heart of the Basque region (on both the French and the Spanish side of the range). It may be hard to pronounce, but this scenic category 3 effort will easily become a favorite for warming up your climbing legs.

Leaving the Basque Country, more lesser-known peaks await the keen climber. These epic “rollers” are a perfect contrast to the longer more sustained efforts of the central Pyrenees. Most are below 2,000 meters and offer a punchy but technical challenge. Port de Larrau is the exception. It is the westernmost mountain over 2,000 meters and an HC category climb with stretches over 15% gradient. It is often called the hardest in the Pyrenees! Maybe that’s why it has only been featured in the Tour de France twice. 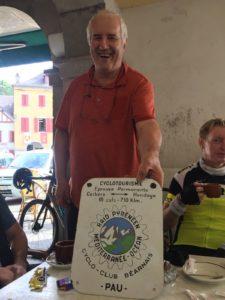 The nearby Col de Pierre St Martin is another overlooked HC monster straddling the border between France and Spain. At 1,766 meters high, it dominates the skyline. A challenging climb from either side, the pass should be on every cyclist’s bucket list. It’s also appeared twice in Tour de France history. For a more familiar Tour climb (and one only slightly easier on the legs), there’s the Col de Marie-Blanque, a Category 1. At 1,035 meters, the climb from the west averages over 7% with sections topping 11%. The jaw-dropping views on the descent are worth every pedal stroke and there plenty of wild ponies to keep you company. Both climbs, the Pierre St.Martin and Marie-Blanque are featured in our Bearn Cycling Tour.

If these climbs seem daunting, remember that there are many more (and less steep) ways to conquer the western Pyrenees. Your hard work will be rewarded as you cycle towards the gem of the entire range, the Pyrenees National Park. The western border of the Park rests within a day’s ride from the Basque Country and quickly becomes a favorite for many Bike Basque guests. Between May and October herds of free-ranging sheep, cows, horses and donkeys are spread across the mountainside to graze on the nutrient rich grasses of the high mountain meadows. The sounds of their large brass bells (so the animals don’t get lost in the fog) are soothing to the ears and they make an entertaining and frequent road obstacle!

If you are looking for a memorable cycling adventure that’s slightly off the beaten path but still gives you the challenge of world class climbs, the western Pyrenees are a great choice. Or if you want to conquer the full stretch of the mighty mountain chain by bicycle, the western region is the perfect starting point…where the Raid Pyrenees adventure begins and doesn’t end until you reach the Mediterranean.