Over the last two blogs, we’ve talked about the Western Pyrenees and the Central Pyrenees. Both are regions of vast peaks and deep greens, thanks to the oceanic influence of the Atlantic and the high annual rainfall. The Eastern Pyrenees, containing both the Ariège as well as the Pyrénées-Orientales departments, are a completely different world. The landscape is undeniably Mediterranean.  Dryness prevails, with hot summers and mild winters, warm winds and arid vegetation including wild thyme, olive trees and vines as far as the eye can see. The mountains here are towering piles of rich brown stone and their dominance of the horizon does not relent until they reach the sea. 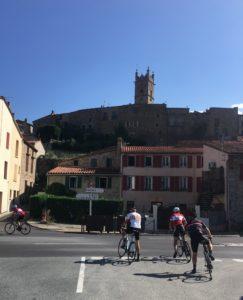 If you ride the RAID Pyrenees tour from west to east, there will be no rest for the weary, as the last few climbs in the Eastern Pyrenees are a big test for tired legs. If you begin the RAID tour here, the first few mountain passes will pose a true test of your climbing skills. No gentle rolling hills of the Basque Country here…you’ll head straight for some HC giants…all before lunch. The category 1 Col de Jau might be your only warm-up. At least you’ll be rewarded with a view of one of France’s most beautiful villages, Mosset, as you cycle past. There’s 23 kilometers of tough pedaling over bumpy roads before you reach the summit, then you can enjoy a long decent to rest your legs before the next challenge.

Port de Pailhères is only one of several HC category cols in the Eastern range. At just over 2,000 meters high, the climb from either side is considered one of the most demanding ascents in the Pyrenees.  From the east, riders will endure “just” 10.6 kilometers at an average gradient of 8.2 percent and a maximum gradient of 10.2 percent. Climbed from the west, the pass is 18.6 kilometers in length and averages a more “mild” 6.9 percent, though there’s no escaping the occasional 10 percent gradient from this approach. While it is closed more than half of the year due to extreme conditions at the summit, Bike Basque tours are scheduled to take advantage of the best weather during the summer and autumn riding seasons. 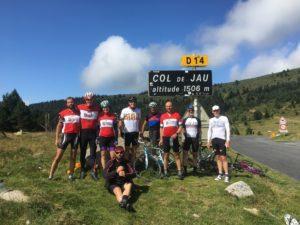 There is a unique beauty to the Eastern Pyrenees not found in any other region of France. There are familiar herds of free-ranging cattle and semi-feral horses found grazing in the high-mountain meadows but the personality of the landscape is genuinely Mediterranean with influences from Catalonia to the south and Occitania to the north. This is a proud, independent region with regional dialects and specialty cuisine, relying on local ingredients reflecting its proximity to both Spain and the sea. The climbs here often feature rough roads, hairpins known as “lacets”, plenty of photo-worthy backdrops rich with bursts of color from wild flowers and fragrant air thanks to wild herbs. It’s no wonder many professional riders make this their home base or winter training grounds. The drier weather and warmer winters mean more days in the saddle. The many bucket-list climbs of the Eastern Pyrenees should appeal to any level of cyclist, from those wishing to retrace the tread marks of their Tour de France heroes or those just wishing to experience a Mediterranean view from the summit of some very fine mountains.